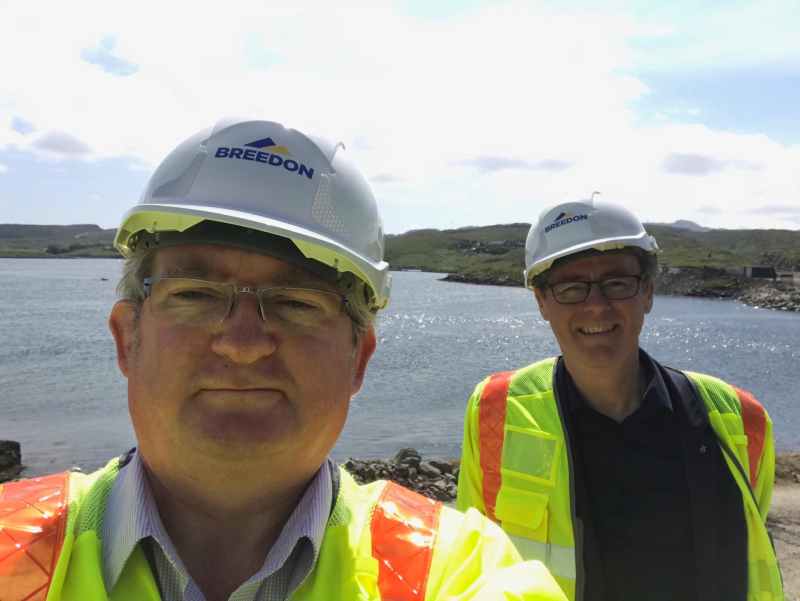 Thanks over bridge to Bernera

Work on the replacement Bernera Bridge is nearing its end, according to reports locally.

Bernera resident and prospective SNP candidate for the local ward on Comhairle nan Eilean Siar, Angus Macdonald welcomed the completion of the construction saying: “It has been a long-drawn-out process, with delays to the timeline, however the contractors and engineers must be congratulated for bringing this lifeline link to completion.

"The islanders and businesses affected by the weight restriction on the old bridge must also be congratulated for their patience over the affected period.

"We look forward to normal access to the island resuming over the next few days, and also look forward to the new picnic area and information boards being completed in ample time for next year’s tourist season.”

In August it was reported that there had been some steel supplier issues on the bridge site that would result in a delay in the programmed date for the bridge being able to accept traffic.

This date was previously notified as 21 September, however, but then this was seen as likely to slip to 15 October. And then there were further slippages.

The August delay was caused mainly by the supplier British Steel not being able to deliver the larger steelwork sections on time. There was also a minor problem in that some of the holes for connecting the sections together needed to be reamed to accommodate the bolts.

It was on September 24 that the assembly stage of the main structure of the new bridge was completed with the final section being put in place. The team then went on to complete the installation by pushing the bridge into its final location while dismantling the lead nosing and taking off temporary running beams.

Meanwhile the Comhairle nan Eilean Siar SNP Group have warmly welcomed the announcement by the Scottish Government that the Comhairle will receive £6.6 million out of a national fund of £32 million for bridges and similar work - the highest allocation for a local authority. The allocation to Comhairle nan Eilean Siar includes £2.62m towards the £3.1m cost of replacing the bridge to Bernera,

Group leader, Cllr Gordon Murray started: "This is a huge boost to our infrastructure in terms of local bridge maintenance and we are grateful to the Scottish Government and Kate Forbes in particular for the much needed allocation.

"However, special thanks go to our MSP, Dr Alasdair Allan, who campaigned vigorously for this funding even being cited in the Finance minister's budget speech earlier this year. "

And the SNP Group have welcomed the 50% discount on ferry fares for school minibuses announced by Calmac this week.  The decision by Transport Scotland will make it more affordable for school groups to travel to and from the islands for educational, cultural and sporting activities.

"It would complement, enormously, Calmac's forward thinking were Comhairle nan Eilean Siar to learn from this announcement and abandon continuing to exclude the elderly of the Outer Hebrides from the Concessionary Fare Scheme on the Barra and Harris Sounds.

"This would further connect the Western Isles or at very least, connect with the services specifically provided for them."

The 50% discount is being introduced this week and will apply across the Clyde and Hebrides network.