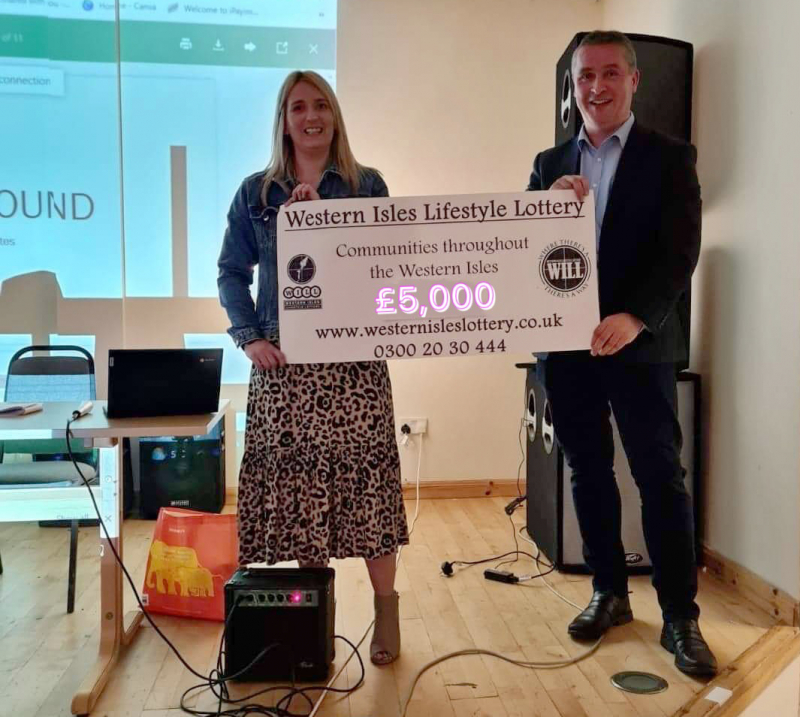 Pictured is Angus Brendan MacNeil, MP,  presenting a cheque for £5,000 to Fiona Nicholson of the newly-formed Castlebay Hall Committee so urgent upgrades to the hall can commence.

The cheque was presented during a fundraising Quiz Night held on Saturday 26 April.

The Castlebay Hall was erected in 2004. It has a capacity of approximately 200 including the stage area, and is the main community space for functions and gatherings.

The local community hall requires immediate repair works carried out to enable the facility to become safely and fully utilised once again. A newly-formed committee comprising  11 enthusiastic locals endeavoured to restore the building to its former glory – but the costs soon mounted up, and there were simply no available funds.

Angus Brendan MacNeil said “Fantastic work has been done raising money for an important local need. Well done to those who have done so much – they are seemingly planning to do quite a lot more too!”

Fiona Nicholson was tasked with the herculean responsibility of securing the £11,000 required to commission the essential materials and labour to complete the works and applied to the Western Isles Lottery for assistance.

Her application detailed the works required including repairs to the heating system, external safety railings, a water pump, internal and fire door replacements, as well as paint and signage.

Janet Paterson of Western Isles Lottery said “Given the Castlebay Hall is the hub of the community, the need for the facility to be safe and functional is regarded as being a priority for the area.

"Thanks to the continued level of support of the Lottery from residents in the Barra and Vatersay area, an immediate grant of £5,000 was able to be awarded to enable the most urgent works to commence. It is intended that further funding will be awarded to complete the upgrades but the level of funding is solely dependent upon the level of continued support of the Lottery by locals. The proceeds of every ticket sale from the area go directly back to their own Community on an ongoing basis. In essence – the more folk who join in, the higher the funding pot rises”.

Fiona Nicholson said “The Castlebay Hall committee are very grateful to those locals who take part in the Western Isles Lottery. The funding will be a great support in the ongoing works Castlebay Hall is in need of.

"The major works will be carried out in the very near future and fantastic social events will be able to, once again, take place. The hall will again be the heart of the Community. The continuation of your support for the Lottery will also benefit further community groups and projects throughout the Island”.

To join the Lottery, visit www.westernisleslottery.co.uk OR contact the Support Line on 0300 30 20 444 (local call costs apply) where an assistant will help you join without the need for technology!