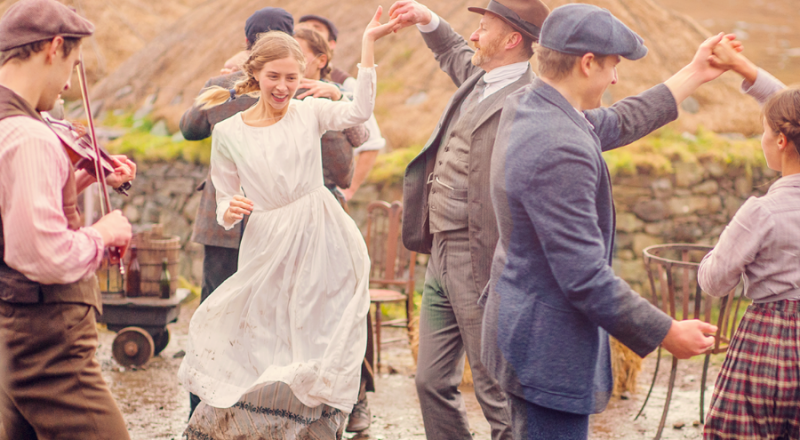 Both the darkness and light evocative of a post-war party suffused An Lanntair arts centre on Thursday night (Thursday May 5) as the local première of the international feature film Road Dance, filmed 18 months ago amidst the stones and memories of the Gearrannan blackhouses, took place in the extraordinary circumstances to which we all have almost become accustomed.

For perhaps the first time for many people after more than two years of the war against Covid-19, large numbers of guests poured into the arts centre and mingled freely. An Armistice-like atmosphere of joy and relief gripped the would-be audience. People studied others’ lip movements as lovers would once have done…but in this case, because so many months had passed when mouths moved unseen.

Outside there was still light, but inside the menacing darkness gathered again as the auditorium welcomed its guests to the personal griefs of Road Dance, a film set more than 100 years ago in the midst of a world war which affected so many lives and loves.

The brilliant and astute cinematography of the film had the audience gripped from the get-go as it unravelled the personal tragedies of families and the brutal personal tragedy of one woman who, like so many in every year both then and now, fell victim to a vivid exercise of masculine might and callousness.

Of course, the general scenario now echoes the unfolding daily disaster that is the war in Ukraine – where families are being similarly torn apart and brutalised by the mind-numbing horror of all-out war.

And it also reflected – in a different way -  the actual weeks of battle to create the film, with the cast besieged by Covid-19 restrictions and alarms, constantly testing and retesting, forced into isolation from the islanders and from each other; and beset for the crucial Road Dance scene by appalling weather that reduced the outdoor setting to mud and left some of those involved hovering on the brink of a cold despair which mirrored the world they were portraying.

Even normally simple matters – like choreographing the Road Dance scenes themselves for actors who’d never seen traditional dancing at any time – became challenging as messages about the routines and videos of them being done, had to be passed from one person to another with the minimum of personal contact.

And the film plot built around regular personal despatches from the Western Front was mimicked by the Covid-19 updates that society was then being rebuilt around.

Another war-time echo came from the camaraderie described by the actors - who, isolated together as performers as well as characters, became each other's sisters and mothers, brothers and friends…at least for the duration of the shoot.

Back in the present time, there was, for the audience – as ever with literary adaptations – the question of whether the film was true, or true enough, to the book.  Or whether the departures from the storyline were capricious and unjustified. That, as the saying goes, is another story.

This event on Thursday was held in partnership with VisitScotland, and was attended by local media-outlets, business owners and tourism stakeholders.

The film is adapted from broadcaster John MacKay’s novel of the same name: a coming-of-age exploration of grief, shame and injustice set against the backdrop of the village of Garenin, from where the author’s mother hails.

For many, Thursday’s event brought back memories of the original book launch, held 20 years ago at An Lanntair’s previous situ in Stornoway Town Hall.

Regular-release screenings will run in An Lanntair on Saturday 21 May, Wednesday 25 and Thursday 26 –however, islanders could access exclusive preview screenings last night (Friday 6) and tonight (Saturday 7).

The Road Dance was filmed exclusively in Lewis over the course of six weeks in October and Novembetr 2020 and the tourism industry hopes it will enable viewers from all over the world to witness the islands landscapes. One in five tourists in Scotland are considered ‘screen tourists’ - tourists whose visit was spurred by portrayals of Scotland in film and television.

Although raised in Glasgow, MacKay spent his childhood summers at his grandmother’s home in Carloway. It was on one of these visits when he first heard the local tale which inspired the novel. MacKay said “It’s a joy for me that the film returned to the island that inspired it and on which it was filmed. Lewis looks wonderful on screen, and I’m delighted the local community is getting an early chance to see it.”

Multiple production companies were interested in obtaining the film-rights. However, American filmmakers Sheridan Road Productions were the first to produce the funding which enabled filming to occur on location in Lewis.

Since premiering at Edinburgh International Film Festival last summer, The Road Dance has been shown world-over and received both official and public praise - winning ‘The Audience Award’ at EIFF and the jury’s choice ‘Best Feature’ award at Manchester Film Festival.

It is hoped that the success of the project will encourage more production companies to film in the Western Isles.