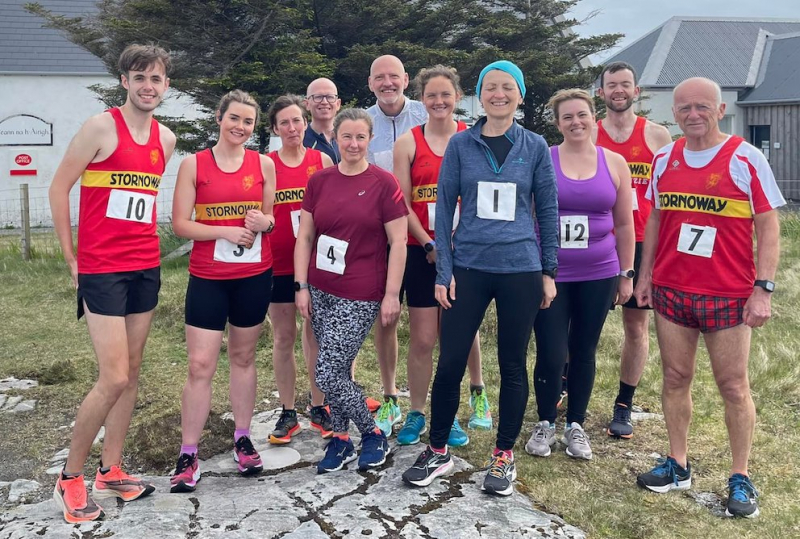 Athletes from Stornoway Running and Athletics Club were flying the flag in Grimsay and Inverness over the weekend, with successes for both juniors and seniors.

Friday (13 May) saw the North District track and field championships at Bught Park in Inverness, with 47 young athletes from Stornoway competing as well as those from North Uist AAC and from South Uist and Eriskay AC.

There were personal bests for Chiara Fisher of North Uist and Hayley Macfarlane of Stornoway in the heats of the U13 girls 100m, Chiara taking silver in the final – and improving on her PB once again in the process.

Proving her flexibility, she also got a PB in the high jump and competed in the javelin alongside Hayley Macfarlane, who her second PB in the long jump, alongside Sarah Macleod. North Uist’s Lily Maciver had a PB in both the long jump and the shot putt.

The under-15s saw Mairi Macritchie getting a PB in the 100m and Abbie Stewart getting a gold, a personal best and breaking the championship best performance record in the 1500 metres.

Mairi Macritchie added her second PB in the 800m final and her third in the shot putt, while North Uist’s Ailsa Mackinnon made a personal best jump in the long jump.

Under 17s woman Lucy Barron earned her place in the 100 metre final by coming second in her heat, then pulled out a PB in the final. She also had a PB in the 200 metre final – a compensation for being pipped to medal positions in both races.

There was silver, though, for North Uist’s Joni Smith in the 1500m and a bronze for Stornoway’s Francesca Greenstock in the 3000m. Francesca’s second bronze was earned with a personal best throw in the javelin.

The girls’ medal tally was completed with U20s successes of gold and silver for Rachel Murray in the 1500m and 800m, and bronze and silver for Ellen McMurdo in the 200m and 400m.

Not to be outdone, U13 boys brought in a gold for Josh Macdonald and a bronze for Harris Morrison in a 100m final dominated by Western Isles competitors, who filled five of the eight finalists’ lanes.

In the 1500m North Uist’s Owen Mathis-Foote took gold and Stornoway’s Ruaridh Smith silver, both in personal best times, and there was bronze for James Anderson in the 200m.

North Uist’s Cathal Dobbie was in silver position in the 800m, with Stornoway’s Daniel Reid and Ruaridh Macphail close behind in third and fourth place, both with personal bests.

The high jump gold went to James Anderson with a PB and the javelin gold to Craig Macleod, while Josh Macdonald long-jumped to bronze position and Harris Morrison took silver in the shot putt. 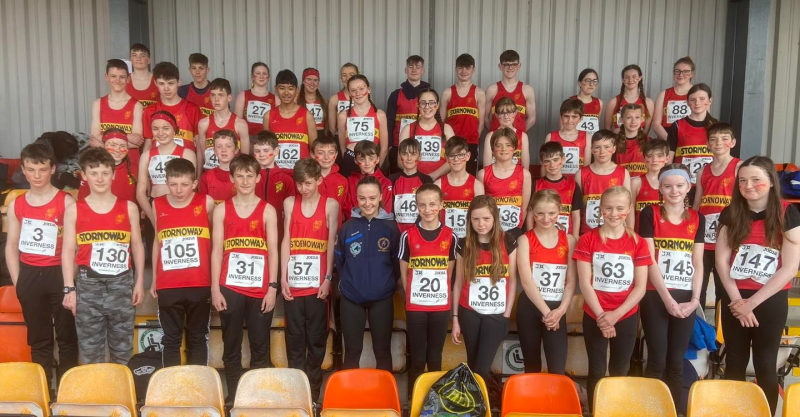 For the under-15s there was a silver at 100m for Stornoway’s Ewan Amos, bronze and a PB for Hector Neally in the 1500m and bronze in a PB time for Liam Macfarlane in the 200m.

Islanders once again dominated the scene in the 800m final – six lanes belonged to Stornoway and North Uist filled a seventh, but it was Stornoway’s Stuart Mackay who came away triumphant with a gold and a personal best time. PBs in the same race were reached by Kenneth Stewart, Calum Beaton, Ben Dyer, John Macdonald and Ruaridh Cowan.

Stornoway’s Ewan Amos and Kenneth Stewart took silver and bronze in the high jump, Ewan adding a gold long jump, Stuart Mackay a bronze throw in the javelin and Euan Campbell Flett a silver 4kg shot putt – a PB for him.

Under 17 men’s competitions saw a PB for North Uist’s Iain Macdonald in the 200m final where fellow Uibhisteach Thomas Brennan took his first bronze, the second coming in the long jump. There was silver for Thomas Brennan, too, in the 200m, where Stornoway’s Finlay Macleod earnt his bronze and a PB.

Charlie Morrison was a gold medallist in the 3000m and the 400m gold and silver came home to Stornoway thanks to Iain Matheson and Finlay Macleod.

Meanwhile on Saturday, SRAC adults were at Grimsay Island Race, where Jonathan Fairgrieve and Muriel Macleod were first male and female, Muriel smashing the female course record by over a minute. Muriel Hamilton was second female and Murdo Mackenzie second male.

The club would like to thank Lochs Motor Transport for providing transport for the youngsters to get to Inverness.

Pictures show the whole squad at Bught Park in Inverness and senior SRAC competitors at Grimsay on Saturday.